The Wilson Creek area is located in the Grandfather district of the Pisgah National Forest, in the northwestern section of Caldwell County, North Carolina. Wilson Creek itself is a water system that originates in Calloway Peak and stretches for 23 miles before dumping into John’s River. It was added to the Wild and Scenic River System on August 18, 2000. There are several designations in Wilson creek area which include: Wild – 4.6 miles; Scenic – 2.9 miles; Recreational – 15.8 miles. 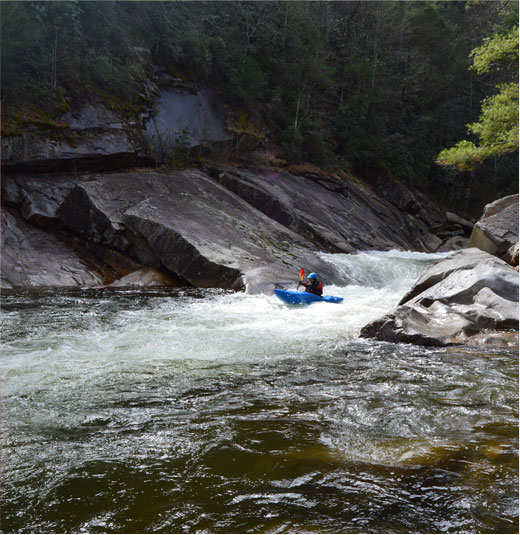 The Wilson Creek Wilderness area was once used by the Cherokee Indians as a summer hunting grounds. It was settled in 1750, and logging began on the dense forest. Mortimer, once the largest community in the Wilson Creek area, was the site of the Ritter Lumber Company sawmill which was destroyed by over 20 inches of rain in 24 hours in July 1916. The week before, a soaking rain had already saturated the ground and heavy lumbering aggravated the speed of the water rushing through the gorge. After a year, efforts to rebuild brought back the sawmill and a textile mill with the community served by a railroad line. The mills provided jobs enough to sustain 800 residents. If still in existence, Mortimer would be the county seat of Caldwell County, North Carolina (which is now Lenoir, North Carolina) However, it ﬂooded again with Wilson Creek reaching over a 90 foot ﬂood stage on August 13, 1940 ending all efforts to bring in industry leaving the area virtually deserted. The concrete shells of the old facilities are visible in a park area. Only a few residents and homes remain upstream at Edgemont, with most the downstream area maintained for public use by the US Forestry Service.

RECREATION
The Wilson Creek area is frequented by hikers and recreation enthusiasts. There are plenty of places to ﬁsh, hike, and camp. Dispersed camping is allowed throughout the forest area, but sites must be set up at least 100 ft. from any water. The Wilson Creek Gorge area is available for day use but there is limited parking. Listed below are the campgrounds in the Wilson Creek area.

MORTIMER CAMPGROUND is a beautiful, primitive campground located 10 miles up the mountain from Brown Mtn. Beach. It is operated by the Forest Service & is open from April 1 – October 31. It has 23 sites for tents and small campers. Fire rings, picnic tables, and 2 bathhouses (with ﬂushing toilets & showers) are available. The fee is $10.00 per night.

BROWN MOUNTAIN BEACH RESORT is nestled against the foothills of the Blue Ridge Mountains. The campground has camping facilities as well as cabins.

BETSEY’S OLE COUNTRY STORE In 1924, when Mortimer was a booming logging town, a small store was built at the corner of what are now N.C. 90 and Brown Mountain Beach Road, serving as a general store and post oﬃce. Betsey’s Ole Country Store is perched deep in the woods of the Wilson Creek area, a short distance from Mortimer campground and the previous Civilian Conservation Corps headquarters there. The small store has seen its share of history, not the least of them being the 1940 ﬂood that washed away nearly the entire town. But not the store. It was built by a Mr. Dupree, and since then it’s gone through many different hands, most recently those of Bruce Gray, who has taken the country store to new heights. Driving the miles of dirt road to get to the store resets your perspective to a simpler place and time. When you arrive, it’s just as welcoming and friendly as you wanted it to be, a store that you feel a part of and somehow a community, though you’ve only met Gray or one of his staff. The store appears in grainy, black-and-white photographs of the town in years past, and today it looks much the same apart from the added camping and trout pond. Activities include: